The mythical Atlantis has awakened. We don’t know if it’s good or bad news. In the Antarctica, a strange signal arises from ice causing strange happenings in the historic monuments around the world and alarming the people. The United States army and the China army, along with scientists, set in motion to discover why there are strange happenings around the world and what’s their meaning. The scientists will have to study and decode the enigmas hidden in some crystal fragments found in Atlantis long ago and they’ll discover that Atlantis wasn’t as everyone thought it was.

I liked the apparition of the dangerous and mythical golems. They’re great killing machines.

This book is one of those books that you don’t want to stop reading, you want to know if the world is going to end and if the characters are going to return to their homes. I was never bored with this book and I recommend it a lot. It’s another of my favorite books. 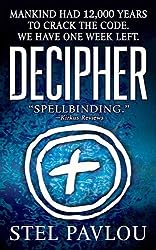