This book is part of a series starring Shane Schofield (Scarecrow).

As its name indicates, this story takes place in an ice station located in the Antarctica. There, a group of scientists find a strange and metallic object buried in the bottom of the ice. The United States government sends a group of marines led by Lieutenant Shane Schofield to protect this object and investigate it. But, there are other governments interested in this discovery, so, they’ll send some soldiers too who will be an obstacle for Scarecrow and his team.

I liked very much this book and I found some of its characters very interesting, for example, Lieutenant Shane Schofield, Mother Newman and the lovable Wendy (a seal).

It has a lot of action and it has a surprising end, I had a wrong impression of what the object was, nevertheless, when I read what it was, I continued enjoying the story. The soldiers from other countries won’t be the only obstacles for the marines, there will also be killer whales.

I highly recommend this book. One of my favorites. 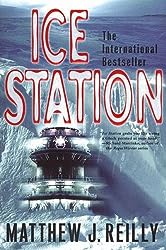