Evie isn’t an ordinary girl, she has the ability to recognize all kinds of paranormal beings (vampires, mermaids, trolls, elementals, sylphs, werewolves, etc). That’s why she works for IPCA, the organization in charge of mantaining the paranormals in control, as an agent, but she has to live in one of the organization’s center. She desires to be a normal girl and to have a normal life in the outside world; go to school, make friends, find a boyfriend and have a locker (Evie is very funny sometimes. She really wants to see and have a locker).

Her wishes will be fulfilled after catching a shapeshifter named Lend and getting to know him. Lend will help her to see the truth about IPCA and they’ll have to deal with the organization. After that, Evie will face a paranormal, named Vivian, who takes paranormal’s souls. And after that, Evie will face the Dark Queen of the Unseelie Court. The Unseelie faeries are the worst. Evie was in love with one faerie named Reth, who will be bothering her or helping her all the way to the end of the trilogy, by the way, he’s a Seelie faerie.

I think this is a great story for teenagers. I had fun reading it, but sometimes I thought that Evie was really soppy. She was also funny like I’ve said. She thought and said funny things. And she’s totally in love with Lend, they both are and they’re very loving with each other. I don’t know if I could have a shapeshifter as a boyfriend, it’s a little disturbing.

I liked the faeries’ worlds made from humans’ dreams and the faeries magic. They’re manipulative, self-centered, powerful and abusive but, in the end, Reth proves that they can improve.

Talking about Jack, he was crazy and impulsive, but I think he wasn’t a really bad person. It was good that Evie talked to him till the end despite of everything that happened in the second book.

Well, it’s a amusing trilogy but not one of my favorites. I liked reading about many different paranormals, including Evie. 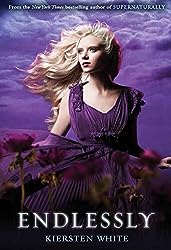