I’ve fulfilled my promise and I am going to post, now, my opinion.

This is the story of David Martín, The Prisoner of Heaven. Since his childhood living with his abusive and embittered father, until his craziness being an adult, caused by a book he was writing with the purpose of creating a religion for a mysterious man named Andreas Corelli.

David started reading books in his childhood, he read them despite his father prohibited him to read because electricity was expensive. David had a hard childhood, well, he had a hard life. The story continues with David’s first job in a journal and how he started working as a writer; he was rejected many times and he worked for men who gave him no credit for his works and who paid him less than he deserved, until he met Andreas Corelli. Also, the story tells us the relationship between Sempere’s family and David Martín, and the way in which he met Isabella, Daniel’s mother, and what kind of relationship they had. Cristina Sagnier was David’s love, but she married Pedro Vidal, the story tells us how this happens as well. Additionally to all this, there’s the exciting story of murders, intrigue and imagination in which David gets involved when he accepts Andreas Corelli’s job offer.

is a great and very exciting book. David had a very intense life, full of tragedy and bad luck. He was a very good writer, but the circumstances made his books less important and less acclaimed than they should have been, and the life gave more credit to those that had more money and less talent than he had.

I think David was never really happy. There was people that tried to help and encourage him, but, always, there was a tragedy and everything was bad for David again. In the book, he writes, one time that everything was going fine and he seemed to be happy, that he did what he always did, spoil everything.

All the story involved with his last book, the one that made him crazy, is a great story; how, Diego Marlasca, the previous owner of David’s house lived a similar situation and how David investigates and discovers everything, followed by the inspector Víctor Grandes.

is a surprising book that I enjoyed so much. I recommend it a lot! 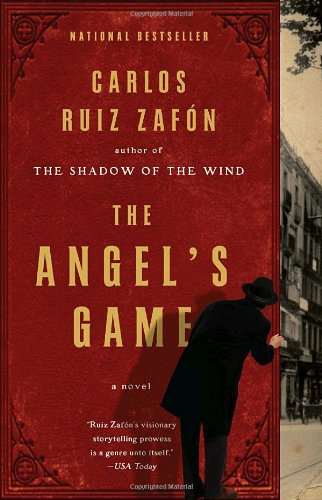